Chuck Schumer’s announcement about the start of the Senate impeachment trial was interrupted by a hilarious gaffe. The Senator accidentally said ‘erection’ instead of ‘insurrection.’

Rough day for Senator Chuck Schumer. The Senator Majority Leader, 70, announced that the House’s article of impeachment (“incitement of insurrection”) will be delivered to the Senate on Monday, January 25, beginning the Senate’s historic second impeachment trial of former President Donald Trump. Unfortunately, Schumer fumbled his televised address from the Senate floor just a little bit.

He incited the what? pic.twitter.com/T57FrN2X0q

“I have spoken to Speaker Pelosi who informed me that the articles will be delivered to the Senate on Monday, “Schumer stated, started off strong. The Senate will conduct a trial of the impeachment of Donald Trump. It will be a full trial. It will be a fair trial. Make no mistake: there will be a trial, and when that trial ends senators will have to decide that they believe Donald John Trump incited the erection — insurrection — against the United States.”

Oof. Truly, something nobody ever wants to think about. Including Chuck, who basically shuddered when he realized what he said. The response on Twitter was swift and hilarious. “Trump is a total dick that’s true… but this is taking it a little too far,” one Twitter user quipped. “Insurrections that last more than 4 hours should seek impeachment attention immediately,” another joked. 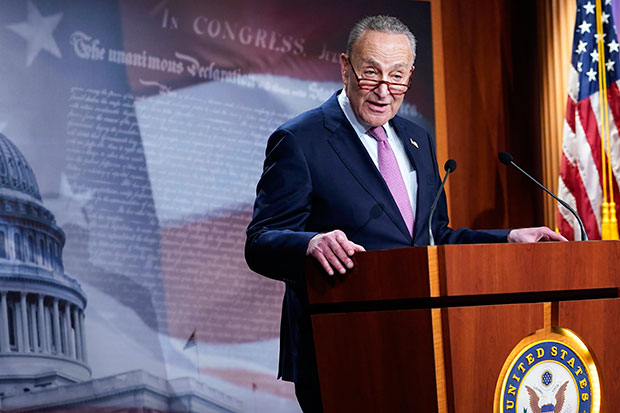 The Senate impeachment trial will be a historic event. Trump was impeached for the second time on January 13 in a lightning-fast House hearing after he encouraged a violent insurrection on the Capitol, where Congress was inside certifying President Joe Biden‘s electoral win. No other president has been impeached twice. In fact, there have only been four total impeachments in United States history.

Should Trump be convicted in his Senate impeachment trial — another first; no president has ever been convicted — he will lose privileges bestowed upon former presidents. That includes a lifelong Secret Service detail, a $200,000 yearly pension, and a large travel stipend. He will also be barred from ever running for office again. Key, considering he’s threatened a 2024 presidential run.