Ahead of Snooki’s return to ‘Jersey Shore’ on the June 10 episode, Deena and JWoww dished to HL about why they’ve stuck with the show after their bestie quit.

Nicole “Snooki” Polizzi will return to Jersey Shore on the June 10 episode for the first time since leaving the show at the end of 2019. The reality star will make a brief appearance to celebrate Mike “The Situation” Sorrentino’s birthday. Of course, even though Snooki stepped away from the series, she’s still stayed close with her castmates — especially her best girlfriends, Deena Cortese and Jenni “JWoww” Farley.

Like Snooki, both Deena and Jenni have families at home, but they’ve decided to stick with Jersey Shore, too. “I actually was thinking about [leaving the show],” Deena admitted to HollywoodLife EXCLUSIVELY. “But 495 and MTV were able to make me feel comfortable. Now, they include our families and if we are away they’ll bring them, so I don’t have to leave my kids. They’ve been really, really great with making us all feel comfortable and working with all of us.” 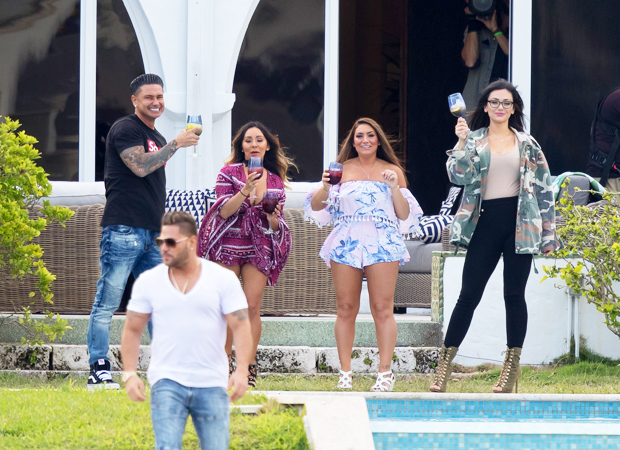 Jenni had a similar sentiment about why she kept filming, despite being a single mom with two children. “Production’s been really great,” she confirmed. “I don’t like saying COVID was a great thing to happen to me, because obviously it’s a terrible pandemic, but, fortunately, it allowed my daughter to be virtual in school, which allowed us to travel to the Poconos [this season]. I think a big problem for Nicole and I is when our kids are in school, we can’t really leave. So I just try to get ahead of it now — I send my school schedules [ahead of time], because I do want my kids to be there.”

Both ladies also agreed that they have no plans to leave the show if it continues. “As long as they continue to have our kids come with us and include our families, I’ll do this until I’m over,” Deena gushed. “I love it! It’s been amazing and as long as I can be with my family while filming, I will continue.” JWoww added, “As long as production and I can work on making sure that the weeks line up where the kids can be there, I’ll be there til I’m 90!” 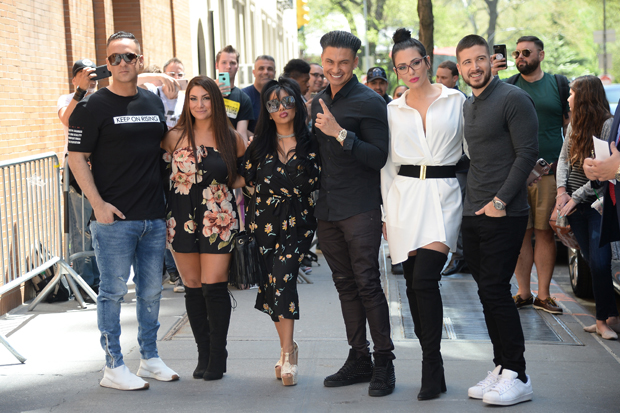 The cast of Jersey Shore doing press for the show. (Shutterstock)

When Snooki quit Jersey Shore in 2019, she explained that she didn’t like leaving her kids for long periods of time to film the family vacation episodes. However, she also said that she “wasn’t happy” filming the show anymore because of all the drama that had built up around Angelina Pivarnick’s wedding. We’ll have to see if her cameos this season change her mind!