Jill Duggar’s husband Derick Dillard has come out swinging against TLC, saying his wife’s spinoff was just a ‘rebranding after ’19 Kids and Counting’ was cancelled after Josh Duggar’s molestation scandal.

Jill Duggar‘s husband Derick Dillard is spilling some serious tea about how Jill and Jessa: Counting On was nothing more than a rebranding by TLC after the network cancelled  19 Kids and Counting in 2015 following eldest son  Josh Duggar‘s confession to molesting four of his sisters. The 32-year-old — who has been married to Jill since 2014 — had plenty to say on Twitter, including how they weren’t paid for their spinoff show.

Derick responded to several Twitter chains discussing the cancellation of 19 Kids and how the spinoff about the older Duggar children isn’t even in their control. When a user named Tamera wrote, “If you cancel one show cancel all. Why should Jessa and Ben or John an abbie suffer. That’s my point Josh and his parents have nothing to do with the other kids. Leave their show alone. Josh was already removed from the original show. Counting On doesn’t even talk about him.” Derick was quick to respond, “It’s the parents’ show, you know that, right?” about Counting On. 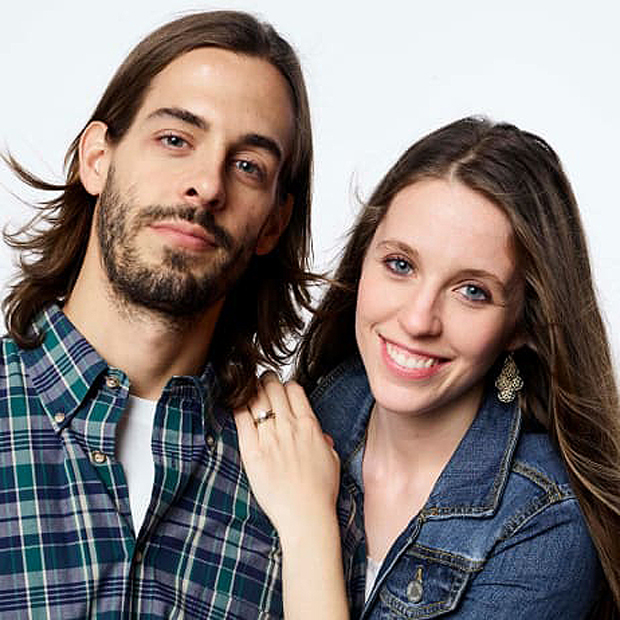 Derick Dillard claims his wife Jill Duggar’s TLC show ‘Counting On’ was nothing but a ‘rebranding’ of the cancelled ’19 Kids & Counting.’ Photo credit: TLC.

When Tamara then tweeted, “Josh is grown. He’s responsible for his actions not his parents siblings anyone,” Derick hit back that it wasn’t just Josh’s molestation scandal that allegedly caused 19 Kids to be axed. “Then why was 19K&C cancelled if it wasn’t related to them?” Derick responded about how family patriarch Jim-Bob and wife Michelle Duggar allegedly still have control over the current Duggar TLC shows. He then went on to call Counting On nothing more than a rebranding, and alleged that Jim-Bob was the one receiving payments for the show instead of his daughters and sons-in-law. 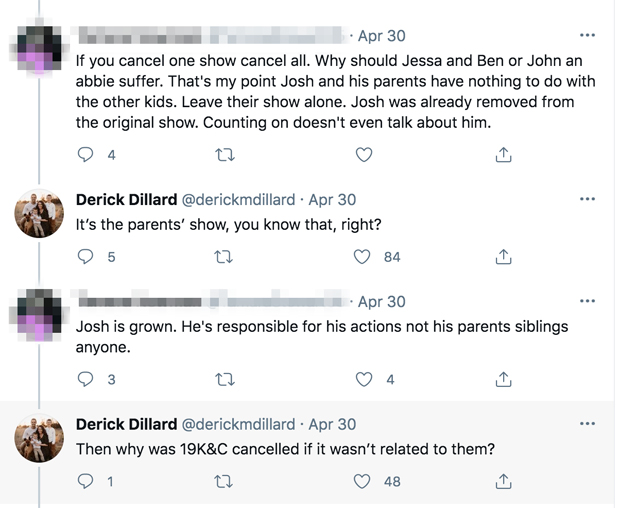 Derick Dillard claims ‘Counting On’ is Jim-Bob and Michelle Duggar’s ‘show’ even though it is about the family’s older daughters.

When a fan named Carolyn jumped in to tell Derick, “I get your point. To me it seemed to be a rebranding. Early on you saw very little of JB and Michelle and little by little they were getting more air time. The focus should have been on the older kids and leave the parents out of it,” about Counting On. Derick said she hit the nail on the head, and claimed that he and Jill were “threatened” when they pushed back about Jill’s parents involvement.

“Yes, that’s exactly what they called it — a rebranding. Same business structure as 19K&C (I.e., one person makes the decisions for all and one person got paid) but it would be ‘rebranded’ to make people think it was different. We pushed back often, and we were threatened often,” he responded. Derick then pointed out, “If you’ll notice, we refused to go to the photo shoot for the intro of the show, ‘Jill & Jessa: counting on’ That’s why we weren’t in the intro, but had to do the shows. Finally, we called their bluff and quit. Will explain more later in a different context.” 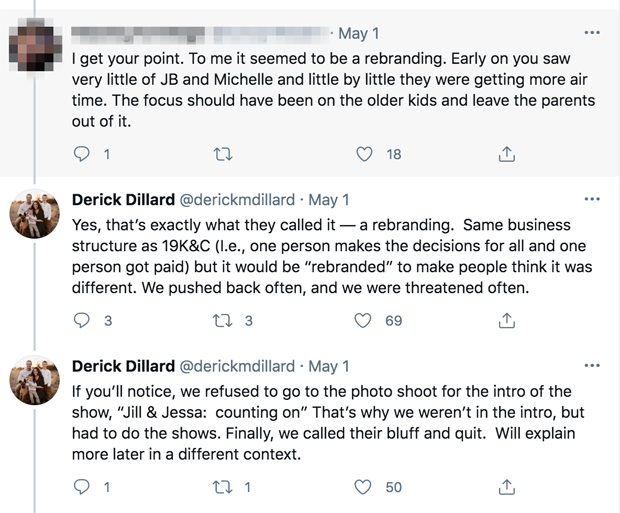 Derek Dillard claims ‘Counting On’ was nothing more than a rebranding of ’19 Kids & Counting’ following that show’s cancellation amid Josh Duggar’s 2015 molestation scandal.

When another user said that they thought that Josh’s molestation scandal was handled “well” by TLC and Josh’s parents, Derick fired back, “How do you know how it was handled? It was not handled well. The public was deceived. Their plan worked. And we were told to keep filming and keep our mouths shut. We called their bluff and left.”

The same fan hit back claiming it was  Derick and Jill’s decision to leave Counting On and they should let the other Duggar siblings who stayed with the show “be.” That’s when Derick responded, “How do you know they’re not trying to leave? They didn’t know what we knew when we knew it. As I’ve said before, we were told to not talk to the others about what we learned. And based on our history, I don’t know what scare tactics are used on the others to keep them compliant.”

“We pushed back for a long time & pretended like there was nothing wrong on the outside before we finally got to the place where we quit. Everyone has their own context, including timeline, incentives, fears/threats, information, etc. that they must operate within,” he continued. “So it will play out and look different as each individual behaves & responds differently within their unique context. My main message at this point is just for people to evaluate critically and not just assume things are as they appear on the surface. Thank you,” he concluded.
Read Entire Article