January Jones is spending her Christmas in California by the pool. And while she misses the snow, she’s fully ready to ditch the winter gear for cute one-piece swimsuits!

January Jones is admitting a little disappointed to not have a white Christmas this year, but she’s certainly making the most of it. The Mad Men star, 42, soaked up the sun in a cute patterned one-piece swimsuit while sitting poolside on Instagram. “This Cali Xmas is so confusing to me,” she wrote in the caption. “Missing the snow and my family but grateful for so much.”

She’s not exactly slumming it in California this winter. In her December 21 post, The Last Man on Earth actress is perching poolside with a huge grin on her face. Her outfit is totally on point. January got a little festive with a sweet, red and white one-piece covered in little dots and candy cane stripes, with a bow tied around her tiny waist. She accessorized with delicate gold necklaces and cool, geometric sunglasses.

January’s comments section was filled to the brim with fans talking about how good she looked! “So spicy! Merry Christmas!” one fan commented. “How desperate of you… kidding YOU ARE FAB!” another quipped. There were actually a ton of “desperate” comments, but all in good fun; January recently called out a hater who dubbed her “desperate for attention” by posting bikini photos. Now, she’s wearing it like a badge of honor and her fans are in on the fun. 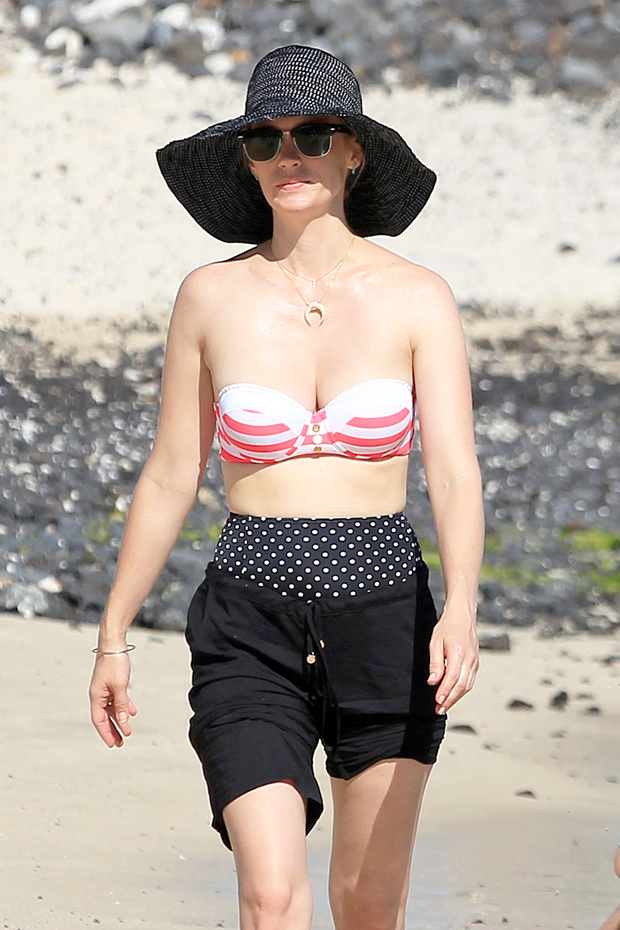 January Jones sizzles in a strapless bikini and board shorts while strolling on the beach in Hawaii, 5/3/15 (Pularazzi / Flightrisk / BACKGRID)

She hilariously posted a photo of herself in character as Betty Draper from Mad Men, wearing a vintage bikini. In the next shot, her onscreen husband Jon Hamm tells her, “it’s desperate.” She wrote as the caption, “Ohhhh… now I see what happened…”