Kim Kardashian Apologizes To Kourtney For Saying She’s The ‘Least Exciting’ To Look At: ‘Such A Low Blow’

While getting her makeup done by Kylie Jenner, Kourtney Kardashian decided to call Kim and have an honest chat about her sister’s infamous ‘least exciting’ diss.

Kourtney Kardashian, 41, finally confronted Kim Kardashian, 40, for once saying she was the “least exciting” family member to look at during an infamous episode of Keeping Up with the Kardashians. Kim’s most quoted diss came up while Kourtney was receiving a makeover from Kylie Jenner, who asked in a new YouTube video, “Okay so I need to know how you really feel about — in the moment — about Kim saying you were the least interesting interest to look at?” 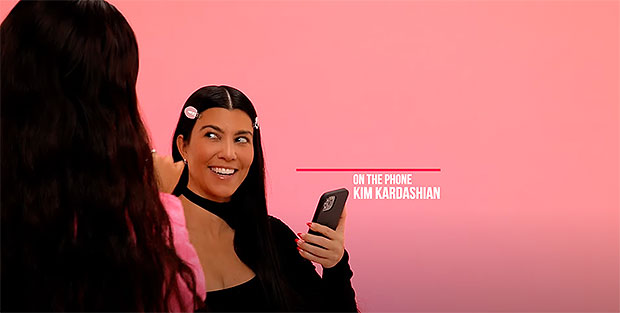 Kourtney Kardashian confronts Kim Kardashian over the phone! [Courtesy of Youtube]“Oh my God, I was literally crying, do you remember?,” Kourtney said in Kylie’s YouTube video, which was uploaded on Feb. 26. She continued, “At the time I took it really personally. I was like, ‘Why would someone in my family say something like that?'”

Kylie gave Kourtney a sympathetic hug at that point, but the Poosh blogger has moved on from her famous fight with Kim that went down in 2017. “And then obviously I could laugh at it — it’s like a funny thing.” However, Kourtney then revealed something fans may not have known: “And then Kim said she meant to say you’re the least…like..something else.” The mother of three couldn’t recall exactly what Kim meant to say, so she gave the SKIMS boss a call!

Alas, Kim admitted that she didn’t “even remember” if she ever told Kourtney that she intended to say some other diss. “I think you were just gonna say you’re the least exciting, and then you added in the ‘to look at’,” Kourtney said as a guess, and Kim jumped in to apologize: “Yeah I don’t know, that was such a low blow.” You can watch the phone call play out in the video above, in which Kourtney also gives Kylie parenting advice (and the advice she’d give to a 23-year-old Kourt).

Like Kourtney said, the lifestyle blogger did not take Kim’s insult lightly at first. Kim made the jab while fighting with Kourtney over the scheduling of their family Christmas card; Kourtney refused to budge on the original scheduled time of the shoot, leading Kim to lash out. Kourtney later cried over the snub during a phone call with Khloe Kardashian in the KUWTK episode that aired in Aug. 2018.

“I’m not here to be mistreated by my f—ing b-tch family. Kim saying that I’m the least interesting to look at — who even speaks like that? You don’t say things like that,” Kourtney tearfully told Khloe over the phone, before adding, “You guys just have really different values than me. I choose to be a mother to my three kids. I’m not here looking for another job. I already work enough — more than I would like to.”

Kourtney went on to call Kim a “very distraught, evil human being.” As you can see in Friday’s new video, it looks like Kourtney’s opinion has since changed — she ended her phone call with Kim with a sweet “love you.”