Kylie Jenner was dressed to impress for ex Travis Scott‘s 29th birthday bash in Miami over the weekend! The stunning Keeping Up With The Kardashians star, 23, took to Instagram on May 2, where she posted photos of her outfit for the night. Kylie looked picture perfect in the photos, rocking a multi-color and patterned fitted dress that featured a hemline just at her ankles.

Along with the dress, Kylie sported a pair of strappy metallic heels, and carried a cute little fuchsia purse. Her hair was worn down and the soft waves of her raven locks cascaded down her back. Kylie’s bare back could be seen in one of the final photos in the carousel post, and she showed off some gorgeous gold bracelets and accessories. “Blurry nights,” she captioned the images, which were captured right next to her luxurious SUV.

Once at the soiree, Kylie took to her Instagram Story and gave her longtime fans a look at Travis’s party. At one point, the Lip Kit mogul even showed off footage of herself dancing with her ex, with whom she shares three-year-old daughter Stormi Webster. The former couple looked like they had a total blast together, and fans were surely happy to see the two continuing to support one another in this new phase of their relationship. 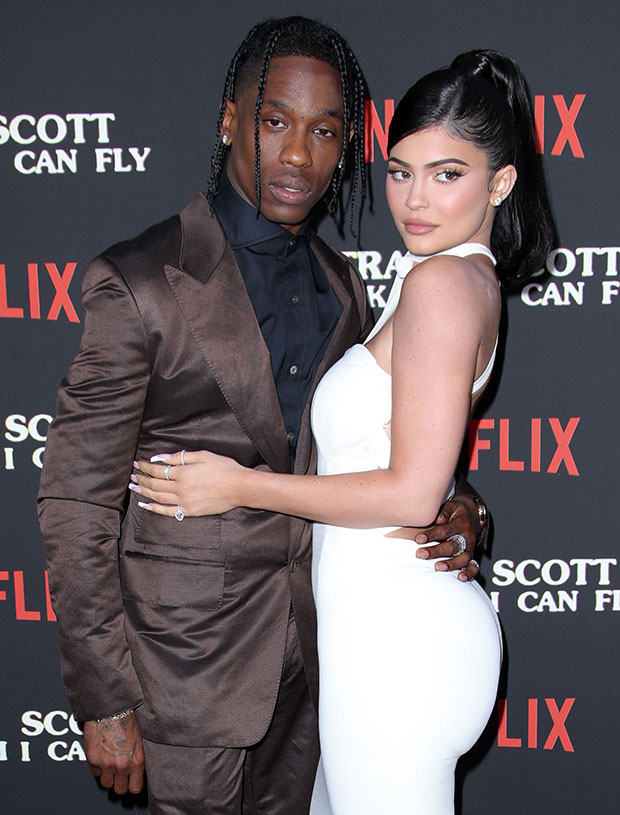 Kylie Jenner and Travis Scott at the ‘Travis Scott: Look Mom I Can Fly’ film premiere at the Barker Hangar in Los Angeles on August 27, 2019 [Shutterstock].Prior to Travis’s birthday party on May 2, Kylie took to her Instagram Story on April 30, the rapper’s actual birthday, and shared a slew of sweet photos featuring Travis and the former couple’s daughter. The pics were super cute, and showed fans intimate moments between the little family. Stormi looked absolutely sweet, cuddling up to her dad in a ball pit, offering him a kiss on the cheek, and posing by his side for a precious photo.

Since their split at the end of September 2019, Travis and Kylie have been so incredibly supportive of one another and have clearly shown that they have maintained their friendship while they continue to co-parent little Stormi. The pair have even taken trips together with their baby girl, and have been making her happiness their top priority. Fans cannot wait to see how the two continue to be there for one another through their major milestones and more!