The actress – whose new cookware line has debuted on HSN – is dishing on her love of entertaining and keeping in touch with Mila Kunis.

“I hope so. That’s the goal.” The look of joy that springs up on Laura Prepon’s face when she’s asked if she hopes to be the next Martha Stewart, expanding her brand into the lifestyle and home entertaining arena, is genuine. The 41-year-old actress has been seriously considering that idea for more than two decades now, even back when she was playing Donna Pinciotti on That ‘70s Show.

Today the mom-of-two is sitting in her New York home while chatting about PrepOn Kitchen, her new cookware line that recently debuted on HSN. In between fielding questions about whether or not there’ll be a That ‘70s Show reunion (there won’t, but more on that later), she’s revealing the inspiration behind her savvy cooking hacks. 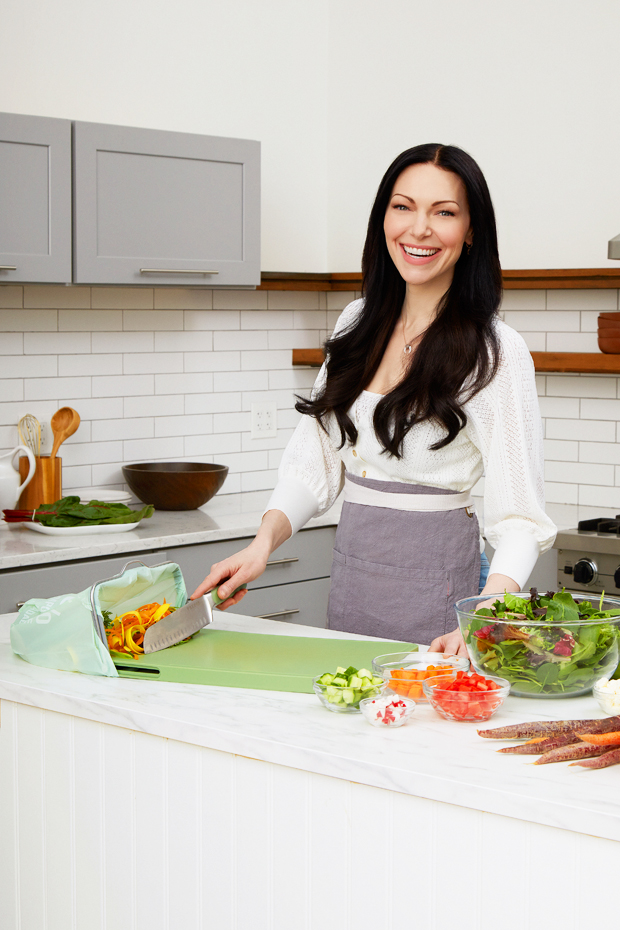 Laura Prepon with the cutting board from her PrepOn Kitchen line, which is available on HSN. (Todd Huffman)

“I basically grew up in the kitchen. My mother was a gourmet chef and I was always so inspired watching her as a youngster,” Laura tells HollywoodLife. “But you know, she was always cooking and was never present with us at any meals. Even as a youngster, even though I was so inspired by her in the kitchen, I felt like there’s got to be a better way.

“There’s got to be an easier way, a more practical way to still be able to share this nourishment with your loved ones. Because, truly, that’s how I share my love with my friends and family. I cook for them and we cook together.”

You can tell the level of thought that went into designing the PrepOn Kitchen products. For example, the cutting board, which features an arm, so you can attach a compostable bag to slide product waste into as you chop so your counter doesn’t overflow. Or the multi-sized silicone food lids that can be snapped over a half-eaten apple, a jar or a can to preserve leftover food.

Fantasizing about creative solutions to everyday problems has been Laura’s jam for a long time. “I’ve always kind of had a business mind,” says the two-time author about expanding PrepOn Kitchen into a lifestyle brand, à la Martha Stewart or Gwyneth Paltrow’s Goop. “I love juggling a bunch of things at once…”

“I’ve been wanting to do one of the culinary lines since I was a child,” says the Orange Is The New Black star who tried to turn her love of cooking and entertaining into a TV show decades ago.

“It’s always been a passion of mine,” she says. “I started doing That ‘70s Show when I was 18-years-old. The first show I wanted to sell was a show called Entertaining 101.” Laura had a concept and a pitch and even put together a presentation with pictures of “themed parties” that she’d hosted. 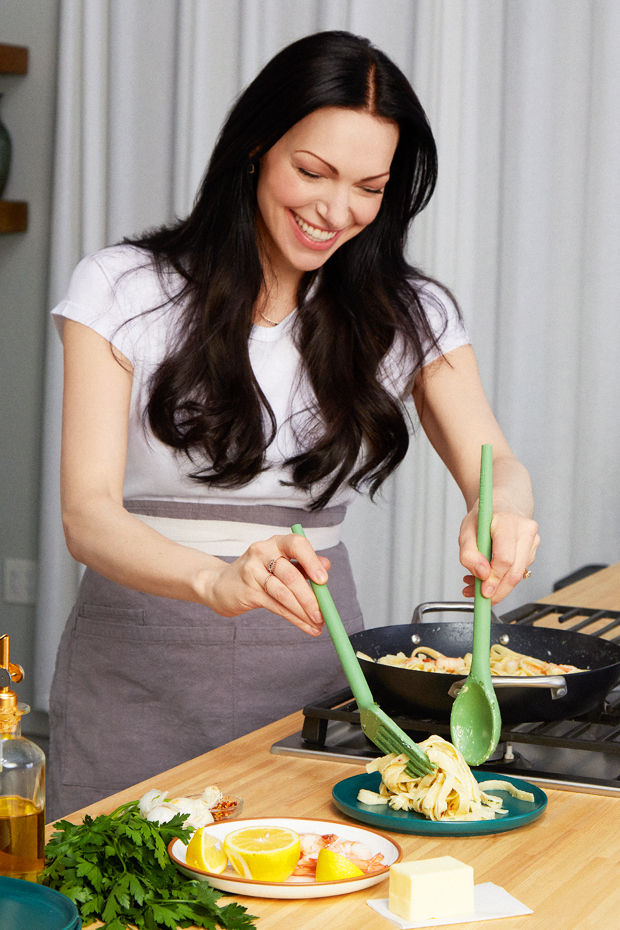 No one bit. She sold a show about poker playing instead but her love of the genre never went away. “I’ve always loved entertaining and home décor and especially, of course, the kitchen,” she says. Giving tips on family gatherings, streamlining the whole process, especially as a working mom of a 3-year-old and a toddler, is her focus now. “I just want things easier and less stressful, especially with cooking,” she says.

When it comes to chitchatting with other working moms, her tribe of parents include her former That ‘70s Show castmates, like Mila Kunis and Ashton Kutcher who have two children of their own.

“Actually, my last book that came out – You and I, As Mothers – I interviewed Mila for that and she shared so many wonderful things,” Laura says. Sharing a set again for a That ‘70s Show reunion, however, is not on the cards, according to the star. 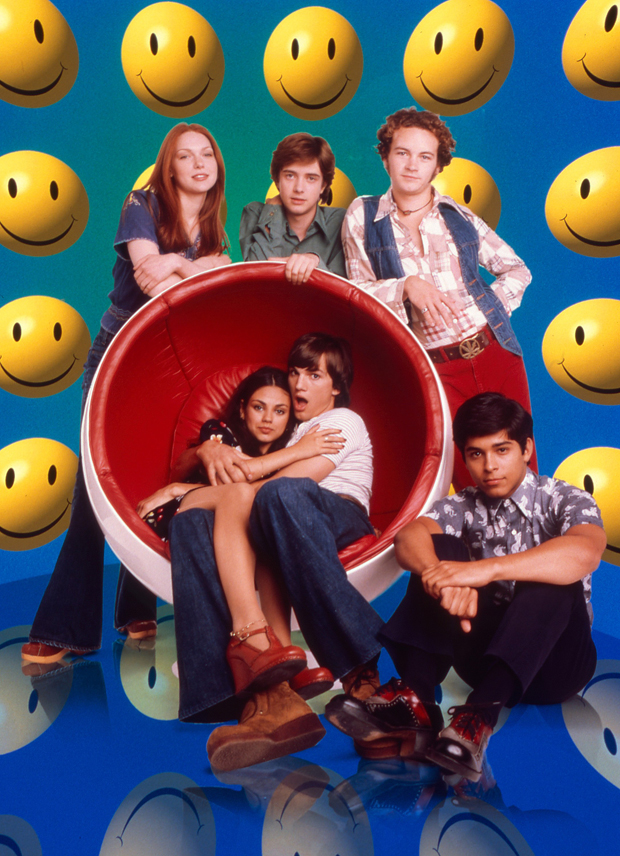 “That experience was wonderful,” she says of the show that ran from 1998 to 2006. “It’s in this time capsule for us… It really is just this special moment in my life and, I’m not going to speak for the others, but I know it was pivotal for so many of us and it kind of…wants to stay there, you know what I mean? Like in that time capsule where, when we get together we laugh about it, or like Mila sends me something funny…”

In the meantime, Laura has a third book to write, children to raise and an empire to build. And, yes, she’s already dreaming up new items to add to her PrepOn line. “I have little scraps of paper [in my office] and [I’ve] ripped things off with design ideas for my product line, because I really have been thinking of this line for years. It comes from such a deep place.”