Alexandria Ocasio-Cortez barely acknowledged Rep. Marjorie Taylor Greene as she shouted at her for supporting ‘terrorists’ and demanded a debate, according to eyewitnesses.

GOP Rep. Marjorie Taylor Greene lashed out at Democratic Rep. Alexandria Ocasio-Cortez outside the House chambers on May 12, according to a new report, aggressively challenging her colleague to a debate. Greene, 46, shouted “Hey Alexandria” twice at the congresswoman, only to get more aggressive when she didn’t respond, according to two Washington Post reporters who witnessed the exchange.

Greene followed AOC and shouted at her about why she supports ANTIFA and “terrorists” like Black Lives Matter.  “You don’t care about the American people,” Greene reportedly yelled. She also challenged AOC to a public debate and said that she was failing to defend her “radical socialist” beliefs. AOC, according to the eyewitnesses, never responded to Greene and simply threw her hands in the air as she walked away. 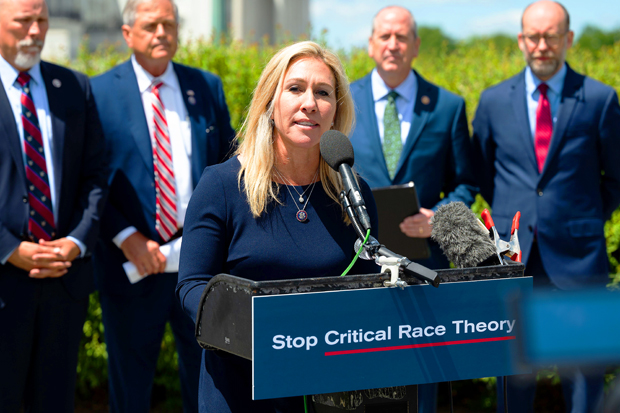 Rep. Marjorie Taylor Green asks for an end of federal funding for the teaching of critical race theory, 5/12/21 (Shutterstock)

While neither representatives have commented on the alleged incident, Greene did spent time on May 12 harassing AOC on Twitter. “Just talked to @AOC again. You chickened out bc you are too scared to debate me about your Socialist Green New Deal,” the freshman Georgia congresswoman tweeted. “You are also a hate-America terrorist sympathizer. #JihadSquad Members of Congress do NOT support terrorism & shouldn’t be afraid to debate their legislation.”

Greene continued on the morning of May 13: “@AOC ‘Ms. Defund The Police’ wants to call the police for security bc she’s afraid of debating with me about her socialist GND. AOC is a fraud & a hypocrite. That’s fine Sandy. Since you lack the courage & intelligence to debate me, I’ll debate the person who really wrote it.” 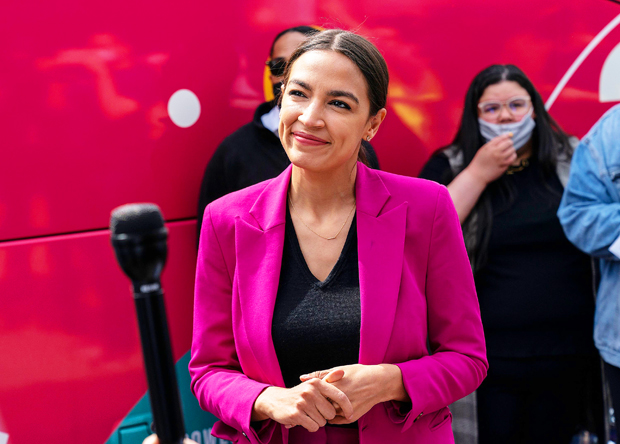 Since entering office in January 2021, Greene has had multiple run-ins with her Democratic colleagues. Rep. Cori Bush (D-MO) had her office moved away from Greene’s after the lawmakers had a confrontation about Greene’s refusal to wear a protective face mask. Greene also faced backlash when she put up an anti-trans sign across the hall from Rep. Marie Newman (D-IL), whose daughter is transgender.

Greene was also stripped of her House committee assignments, including those involving education, after past violent and offensive statements came to light. Greene had called school shootings like Parkland “false flags,” even confronting a teenaged David Hogg on the street. Past Facebook posts called for violence against Democratic leadership — including AOC.