Meghan McCain Calls Out Andrew Cuomo For ‘Not Really Apologizing’ To Accusers: ‘He’s A Pig’

Meghan McCain was baffled by NY Governor Andrew Cuomo’s lackluster apology to the three women accusing him of harassment. ‘The View’ co-host called him out as a ‘pig and a pervert.’

The ladies of The View aren’t buying Andrew Cuomo‘s excuses. After the New York governor, 63, apologized to the three women accusing him of sexual harassment, co-hosts including Meghan McCain called Cuomo out for claiming to not know that he made the young women “uncomfortable” with his inappropriate behavior. As Meghan put it, Cuomo looked like a “hostage” being forced to make an apology video.

“First of all, he looks like he’s in a hostage video,” Meghan said, laughing, describing Cuomo’s March 3 press conference. “He’s not even really apologizing, he looks like a mechanical robot reading.” She referenced the allegations of one of Cuomo’s accusers, Charlotte Bennett, who said that the governor harassed her, including asking her uncomfortably personal questions while she worked as his aide in 2020.

“If an old man is asking a 25-year-old woman, ‘Would you have sex with an older man?’, what do you think she thinks you’re asking?To talk philosophy? Obviously, she thinks you want to…” Meghan got censored by the broadcast before adding that she thinks Cuomo is “a pig and a pervert.” She wasn’t alone in this opinion on The View. Co-host Sara Haines quipped that “you only have to watch one HR video to know that you’re the creepy guy when you say certain things.” 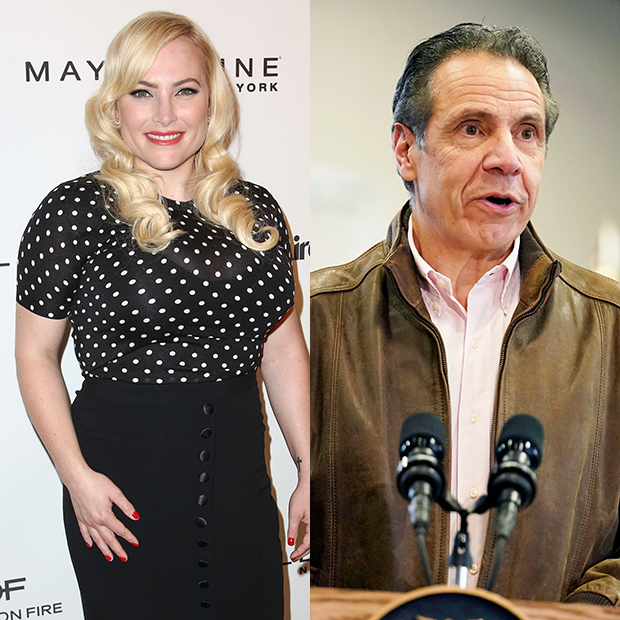 Cuomo apologized to his three accusers for “any pain I have caused” during his lackluster press conference. “I apologized several days ago. I apologized today. I will apologize tomorrow. I will apologize the day after,” Cuomo stated. “I now understand that I acted in a way that made people feel uncomfortable. It was unintentional and I truly and deeply apologize for it. I feel awful about it and, frankly, I am embarrassed by it.” He said that he will not resign, and welcomes the New York attorney general’s investigation into the claims.