Officer Michael Fanone isn’t holding back while speaking about his harrowing experience during the Capitol insurrection, which gave him a heart attack and left him with PTSD.

UPDATE (5/12/2021, 10:24 PM ET): Congress. Rep. Eric Swalwell (D-CA) took to Twitter on May 12 to claim that Officer Michael Fanone was hung up on by the staff for House Minority Leader Kevin McCarthy (R-CA) when he called his office to “show” how he nearly died during the Capitol riot on Jan. 6.

I just spoke with a very upset Officer Michael Fanone. It’s #PoliceWeek and for weeks Ofc. Fanone has made multiple requests to talk to @GOPLeader. He wants to show McCarthy what he experienced on 1/6. Today he was hung up on by McCarthy’s staff. RT if Kevin should meet a hero.

“I just spoke with a very upset Officer Michael Fanone. It’s #PoliceWeek and for weeks Ofc. Fanone has made multiple requests to talk to @GOPLeader. He wants to show McCarthy what he experienced on 1/6. Today he was hung up on by McCarthy’s staff. RT if Kevin should meet a hero,” the tweet read.

It didn’t take long for McCarthy’s communications director Michele Perez Exner to respond to Swalwell’s tweet and deny the accusation. “This is not true. Officer Fanone called our office and spoke with our staff who then offered to provide the email address of our director of operations. He was not hung up on,” her response read. Swalwell then reportedly followed up with, “Officer Fanone told me he was hung up on. Are you calling him a liar?”

This is not true. Officer Fanone called our office and spoke with our staff who then offered to provide the email address of our director of operations. He was not hung up on. https://t.co/em5RKTp7vq

ORIGINAL: As insurrectionists attacked the United States Capitol building on January 6, Officer Michael Fanone, quite literally, put his life on the line to protect those inside. Fanone, a 40-year-old father of four, is now speaking out about the attack that caused him to have a heart attack and condemning politicians who continue to “whitewash” what happened that day. Here’s what you need to know:

He Suffered A Heart Attack During the Siege

Fanone called the insurrection a “medieval battle scene” in a January interview with The Washington Post. Hours into that battle, as Fanone and his fellow officers battled “15,000 people,” someone grabbed his helmet, pulled him to the ground, and dragged him down a set of stairs on his stomach. Rioters swarmed and began beating him and other officers with metal pipes and a pole with an American flag attached, according to police.

Fanone and another cop were hit with stun guns, which caused him to have a “mild” heart attack. He recalled in the interview that the mob was repeatedly shouting “USA!” as the siege occurred, adding that he heard someone shout, “We got one! We got one! Kill him with his own gun!” The rioters had stolen his badge, spare ammunition, and his police radio. Footage of the attack immediately went viral.

He was stun-gunned several times and beaten with a flagpole during the Capitol attack.

He’s Calling Out Politicians Who ‘Downplayed’ The Riot

In an interview with CNN’s Don Lemon, Fanone said it’s been “difficult” to hear politicians act like the siege on the Capitol, where Trump-backed insurrections broke barriers, damaged property, called for the heads of prominent politicians, and violently attacked officers such as himself, was no big deal. Last month, former president Donald Trump falsely claimed that the rioters were “hugging and kissing” police.

“It’s been very difficult seeing elected officials and other individuals kind of whitewash the events of that day or downplay what happened,” Fanone said in the April 27 interview, which you can watch above. “Some of the terminology that was used, like ‘hugs and kisses’ and ‘very fine people,’ is very different from what I experienced and what my co-workers experienced on the 6th.” When asked specifically about Trump’s comments, Fanone said, “I think it’s dangerous. It is very much not the experience I had on the 6th. I experienced a group of individuals who were trying to kill me to accomplish their goal.”

He Has PTSD After The Capitol Attack

Along with the heart attack Fanone suffered during the insurrection, the officer also experienced a traumatic brain injury and suffers from post-traumatic stress disorder (PTSD), he told CNN. “It’s been a roller coaster, man. It’s been up and down,” Fanone said. “Probably for about the first two weeks after the 6th, I was still riding pretty high on adrenaline. Shortly thereafter, I started to experience some of the more psychological injuries, PTSD, some of the emotional trauma from what I experienced that day.” 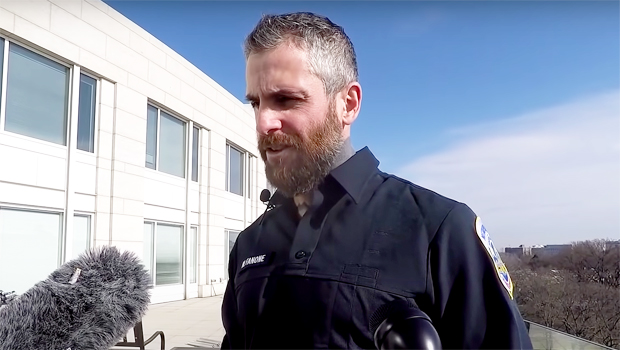 The Men Who Attacked Him Have Been Arrested

Daniel Rodriguez, the rioter accused of shocking Fanone with a stun gun and triggering his heart attack, was arrested in March for assault. Assaulting a police officer with a deadly weapon carries a sentence of up to 20 years in prison. Rodriguez is also accused of smashing a window at the Capitol and stealing an emergency escape hood, which is designed to protect lawmakers against chemical munitions.

He Joined The Force After 9/11

Fanone has been with the DC Police Department for nearly two decades. He was inspired to serve in law enforcement after the attacks of September 11, 2001, in which terrorists flew planes into the World Trade Center in New York City and the Pentagon in DC. Fanone normally works in plainclothes as a narcotics officer, but geared up and headed to the Capitol with hundreds of other officers as the siege broke out.