For weeks, WandaVision fans have been theorizing possible cameos in the final episodes of the Disney+ series. Now Paul Bettany is setting the record straight about what’s really going on with that cameo he teased. Spoiler alert: the cameo was Paul Bettany as White Vision.

Will there be a big appearance by someone special in the finale of #WandaVision? @Paul_Bettany would love to answer but he's too busy pretending to have technical difficulties. 🤖 https://t.co/i9rZzYvW4s@wandavision@disneyplus pic.twitter.com/GDg979zFgS

“You know when you think something’s going to be funny when you say it, and then you actually panic about it, which is what I did because fans started guessing who it might be and they were guessing people like Benedict Cumberbatch or Patrick Stewart,” Paul said on the March 4 edition of Good Morning America. “And I was thinking, my God, that’s a good idea, and they will be so disappointed when they find out it’s me.”

This all started when Paul said in an interview that there was one character he’d “longed to work with” who hadn’t been revealed yet. “There is one character that has not been revealed,” the actor told Esquire. “And it is very exciting. It is an actor I’ve longed to work with all of my life. We have some amazing scenes together and I think the chemistry between us is extraordinary and fireworks on set.” 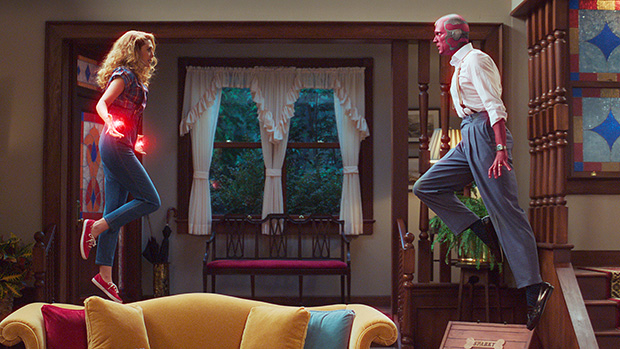 Paul’s words were like WandaVision wildfire. Fans began guessing possible actors who could be the mystery cameo. One theory that became popular was that Al Pacino would be revealed as the villainous Mephisto, a Marvel character many fans believe is holding all the strings.

This theory gained flight after fans uncovered that Paul said at 2015 AsiaPOP Comic Con Manila that Pacino and Robert De Niro are two actors who inspired him growing up. As of now, Paul hasn’t worked with Pacino or De Niro. Back in 2014, Pacino confirmed on the Happy Sad Confused podcast that he had met with Marvel Studios head Kevin Feige.

Paul is not the only person guilty of hyping up a cameo. Elizabeth Olsen teased a Luke Skywalker-esque cameo to TVLine. “I’m really excited,” Elizabeth said. Evan Peters did show up as the “recast” Pietro Maximoff earlier in the season, but WandaVision may have one more surprise in store for fans in the March 5 finale.