Selena Gomez turned heads on the set of her new Hulu series ‘Only Murders in the Building’ when she walked on set with a shirt soaked in fake blood.

Selena Gomez, 28, proved her upcoming Hulu series will most likely have some gore in it when she showed up on the set full of fake blood! The singer and actress was wearing an off-white turtleneck sweater that was splashed in the red liquid on the front and a plaid skirt when she was photographed walking during the filming of Only Murders in the Building on the evening of Apr. 10. She had her locks tied back in a low ponytail and wore hoop earrings with the outfit as well. 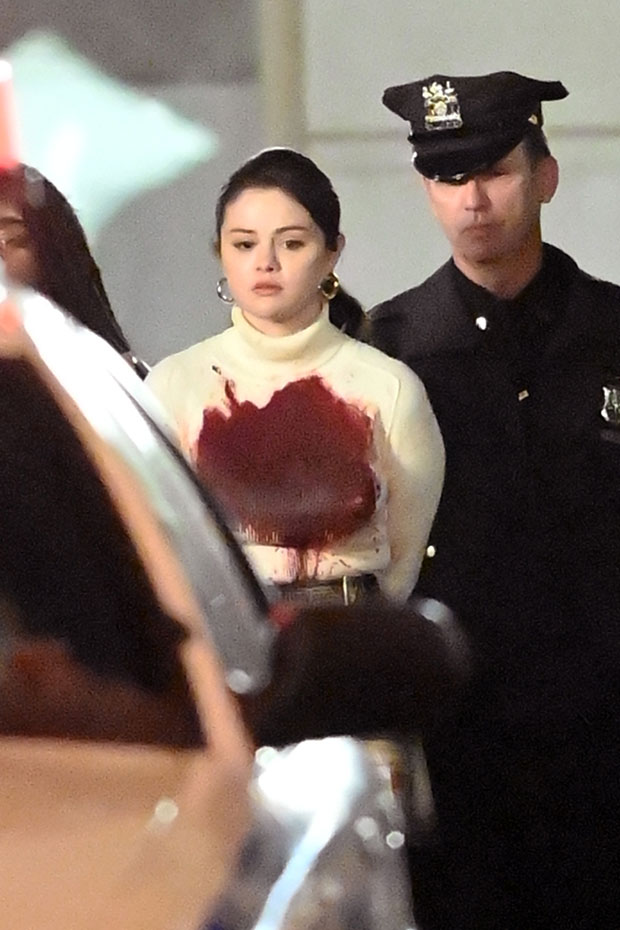 Selena Gomez covered in fake blood on the set of her new Hulu series. (SplashNews)

In the scene Selena was filming, she could be seen getting arrested and escorted into a police car and she appeared to act visibly upset and panicked. After she wrapped up the intense scene, she was spotted bundling up in a warm brown jacket and a surgical face mask to protect herself and others from the COVID-19 pandemic. She was also wearing black combat boots while hanging out on the set. 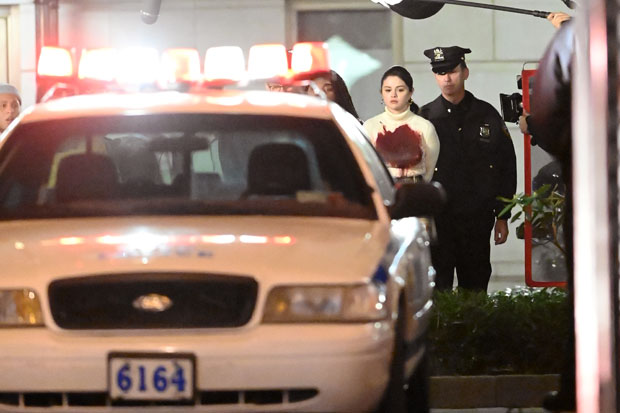 Selena Gomez on the set of her upcoming series. (SplashNews)

Selena’s latest appearance seems to prove there will be some drama on the upcoming comedy series, which was co-created by This is Us creator Dan Fogelman as well as Steve Martin and John Hoffman. The show follows three strangers, played by Selena, Steve, and Martin Short, who are obsessed with true crime and suddenly find themselves involved in one. A premiere date is yet to be released.

When Selena’s not working on her latest television series, she’s sharing cute pics on Instagram. The talented star shared some throwback photos of her and BFF Taylor Swift, 31, in Mar. and admitted she’s missing the “Willow” singer in the caption. “kinda missin this one,” the caption read.

On Apr. 11, Selena shared another photo to Instagram but this time it featured her and fellow singer Julia Michaels, 27. She had her arm around the “Issues” crooner in the pic and and wrote “Babies” in the caption. Julia didn’t hesitate to respond with sad face emojis and the comment, “I love you. So much. Crazy to think how much life we’ve lived together already. ❤️my muse forever.”